That took me back to the image I used in the post linked above. I cropped it in order to think more about exactly when it was taken. It also shows my sister Jeanette (19 March 1940- 15 January 1952).  My father was in the RAAF from 8 April 1940 to 23 November 1945. The following photo was taken probably in 1944. It shows the family grouped in the yard at 61 Auburn Street.  It is possible my father took the photo before he was sent to Port Moresby, where he served in the last year of the war. Reflecting on the fact that these are wartime photos has been part of my revisiting them. 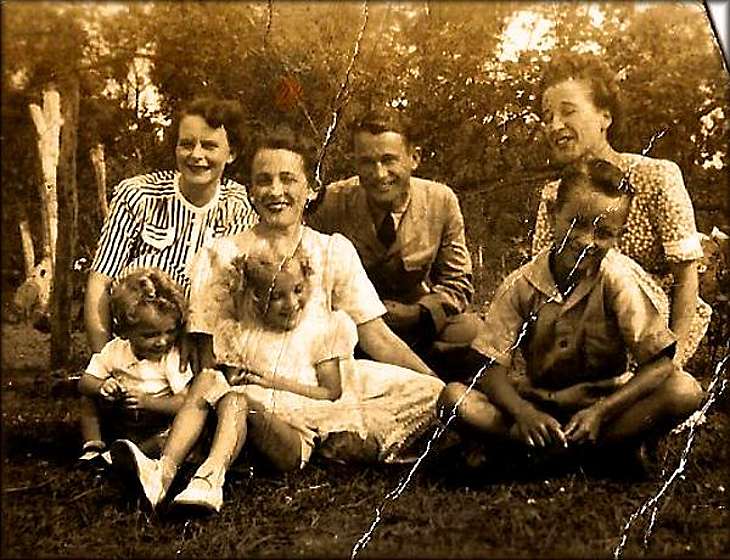 Left to right: back row: my aunt Ruth Christison, my uncle Neil Christison (in RAAF uniform), my aunt Beth Christison. Front row: me, my mother Jean Whitfield, my sister Jeanette, my brother Ian. The photo is creased so much because my father took this copy with him to Port Moresby.

Now the cropped photo, which may even date from the same day. If so, Ian would have been eight or nine years old. 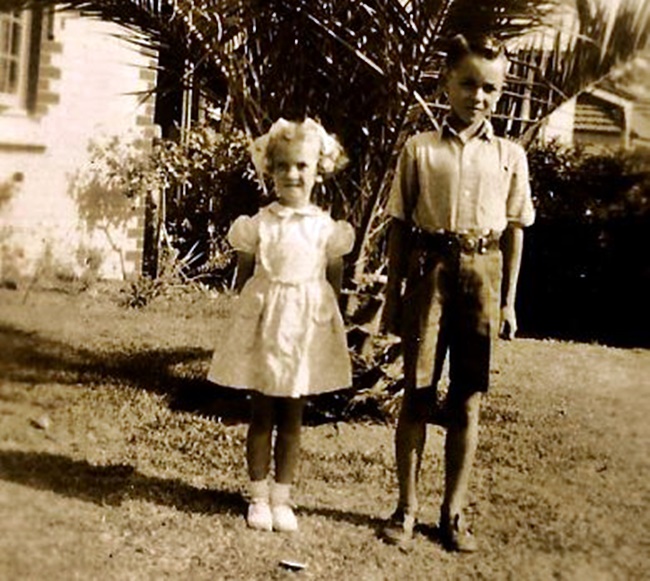 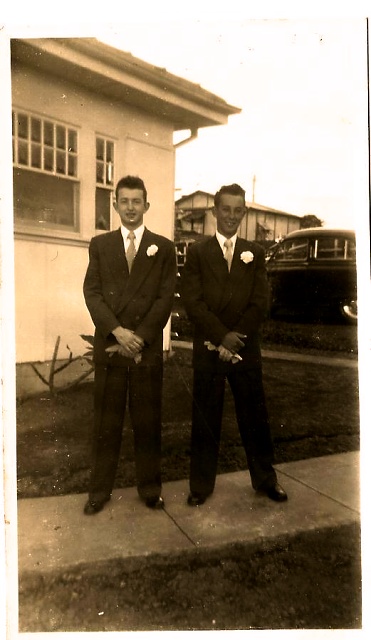 Yesterday was VP/VJ Day — Victory in the Pacific/Victory over Japan. 74 years! And yes, I was alive at the time, doing what I have told before:

I do remember sitting on my dinkie on the gravel drive, near the Dorothy Perkins climbing rose which I called Mrs Perkins and confused with the lady next door who I thought was also Mrs Perkins. A yellow biplane flew over very low and the pilot leaned out and waved to me. My mother later told me that must have been the end of World War II. 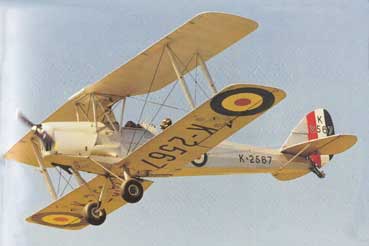 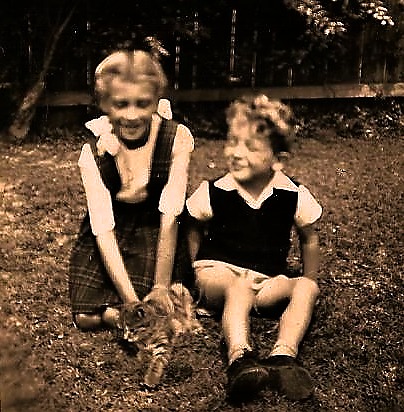 My dad was still in the RAAF in Papua. Here he is in the cockpit of a Kittyhawk in Port Moresby: 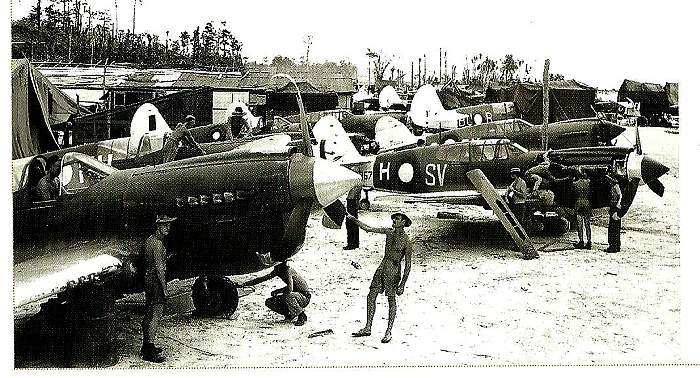 And here he is in uniform: 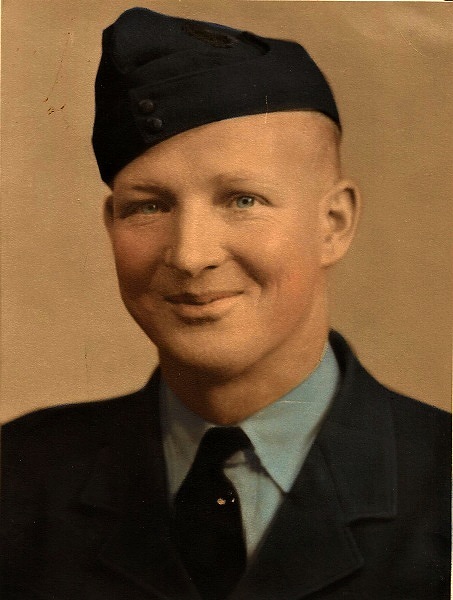 My uncle, Neil Christison, turned 21 in July 1945 — I was named after him — was around Moratai at the time. His was a hard war. Here he is out of uniform in the backyard at Auburn Street, Sutherland. 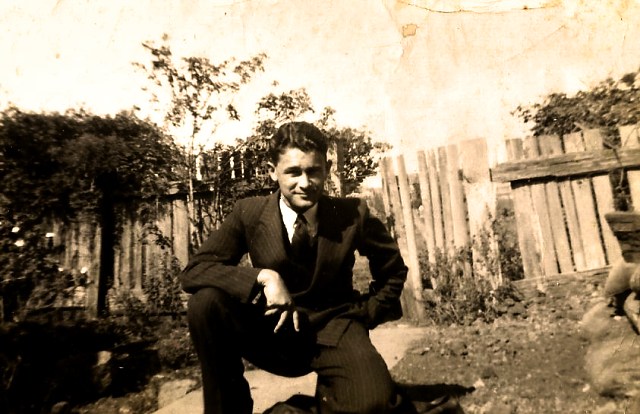 Another uncle, Keith Christison, was in the army on the home front. 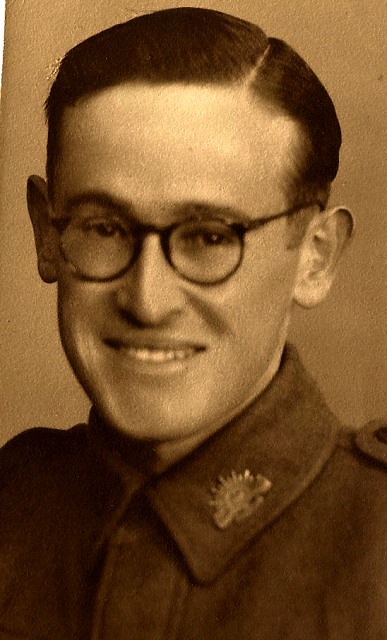 Yesterday there was a commemoration at Wollongong City Diggers. To be honest, it wasn’t until I saw footage on the local WIN News that I remembered what the day was! Not many WW2 vets left now. The scene at City Diggers yesterday, photo from our local member of parliament Sharon Bird: 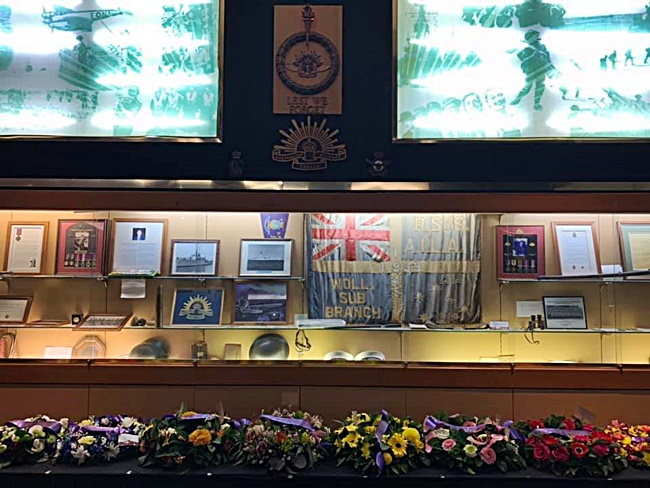 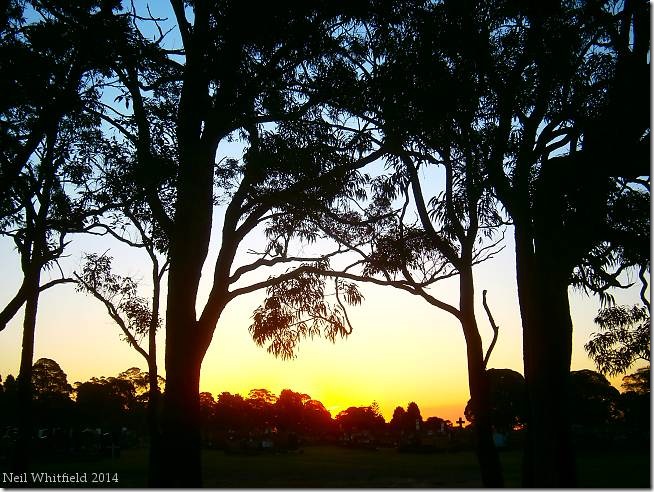 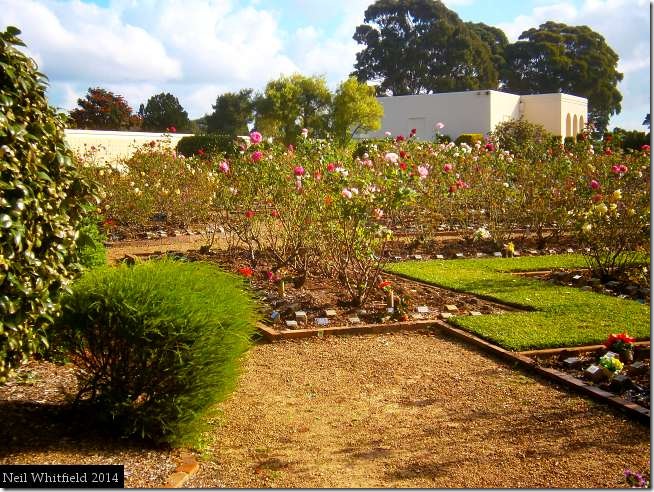 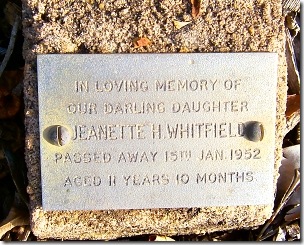 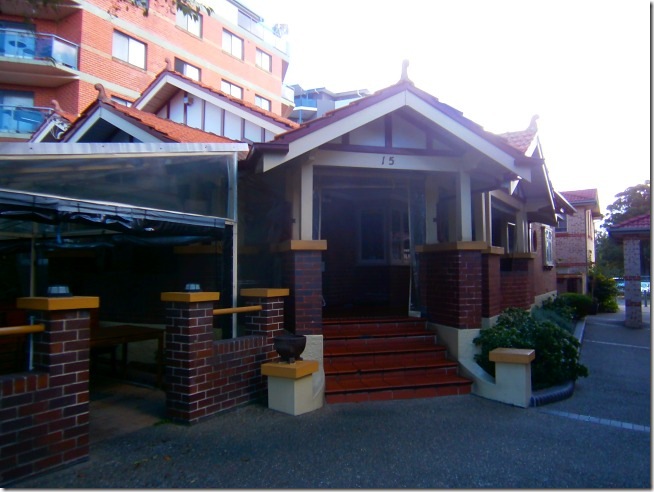 In the Sutherland United Services Club: 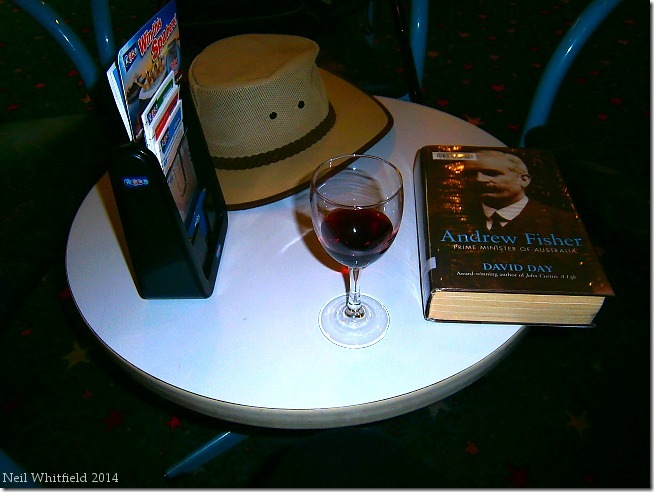 What took me back to Sutherland. See Ian and I have just run out of uncles. 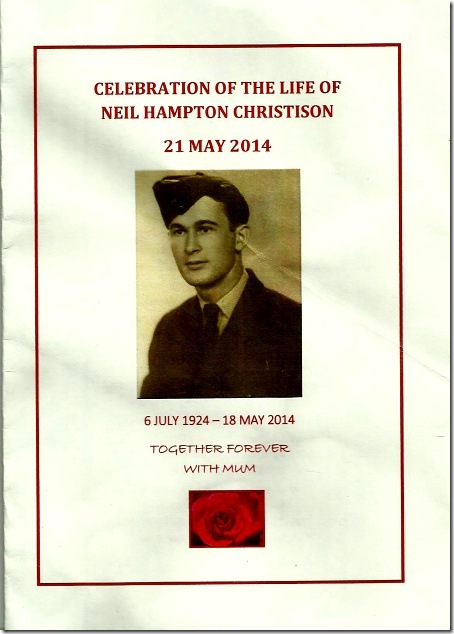 What better than to repost from last year?

In my Neil’s Decades series you will find much that is relevant.

And going back to the South African War I should add:

….pictures of the people – all relatives – mentioned in those posts… 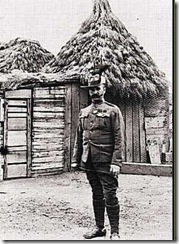 John Hampton Christison in South Africa; David Christison, his son, a sapper on the Western Front in WW1; Keith Christison, my uncle, WW2 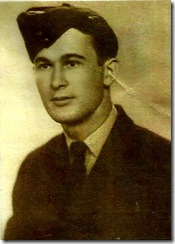 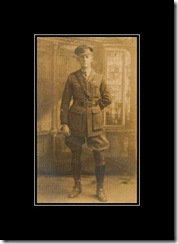 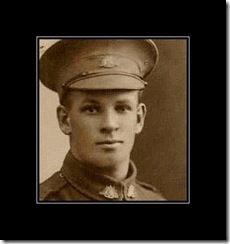 One hopes that 2019 Anzac Day will pass without incident, given recent events in New Zealand, Turkey, and Sri Lanka.

That line is key to Kim Sherwood, Testament (2018), which I recently read courtesy of Wollongong Library. I also read a fitting companion. 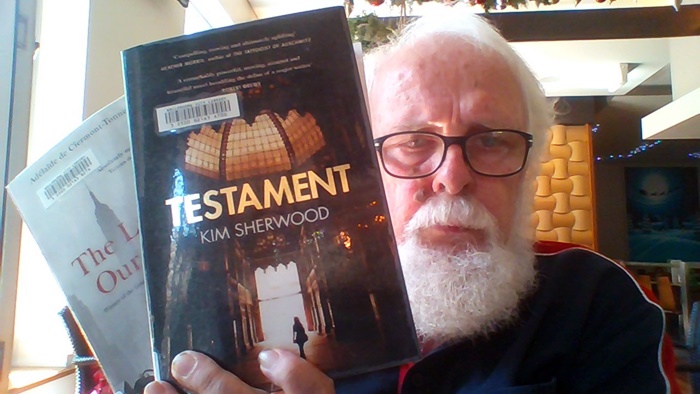 Consider the stories I retold in my previous post, especially of my 1959 classmates Herbert Huppert and Peter Deli. How little I really understood of their stories, and so many others in that class of 1959. Eric, for example, who unaccountably had relatives in the Dominican Republic.

Fact is, as I played with my teddy-bear Sookle (yes, I know!) in Sutherland in the 1940s there were things going on elsewhere in the world which we still haven’t fully recovered from, things which affected those classmates-to-be far more directly.

And quite frightening is where we find ourselves now, as Kim Sherwood writes:

But I am your granddaughter always… My grief is a private grief, but here are the demands of stones and poems and ribbons left at altars, of mass graves without names. I will go to Prague. I will buy a museum ticket and walk the silent streets of Theresienstadt, past tired men selling army surplus from barracks with smashed windows, to the cellar painted red with the Star of David, where I will pray… My small film will gain attention as security at Jewish institutions is at high alert, as shootings in Paris wake us up, as refugees are made to plea at barred ports, as the Mediterranean swallows lives, as a ‘Beware Jews” sign goes up in north London. as tickets to the Blue Room sell out, as the UK closes its doors to Europe, as neo-Nazis attack our leaders and our citizens, as protesters take to the streets of Budapest in their thousands….

The other novel, The Last of Our Kind by Adélaïde de Clermont-Tonnerre was the winner of both the Académie Francaise Grand Prix du Roman and the 2016 inaugural Filigranes prize, awarded to the book with the widest general appeal.

Werner Zilch was adopted as an infant, and knows nothing of his biological family. But when, in 1970s New York, he meets the family of Rebecca, the woman he has fallen in love with, a mysterious link means he must uncover the truth of his past, or run the risk of losing her.

Spanning 1945 Dresden, the Bavarian Alps and uncovering Operation Paperclip, this is a riveting novel of family and love that seamlessly blends fact with fiction.

Werner von Braun plays a key role in the plot. On Operation Paperclip.

The Last of Our Kind is a fascinating journey through much key 20th century history, though perhaps at times too clever! And I have one pedantic note: characters at one point in 1948 play 45 rpm records, one year before that format was released! But do read this novel. The author’s background story is also most interesting.