Recycles from this blog.

Meanwhile on the other side of the Dateline:

What time will we know who the winner is?

The close of polls on the west coast – that’ll be 3:00pm AEDT tomorrow – will be the first opportunity for the election to be “called”. 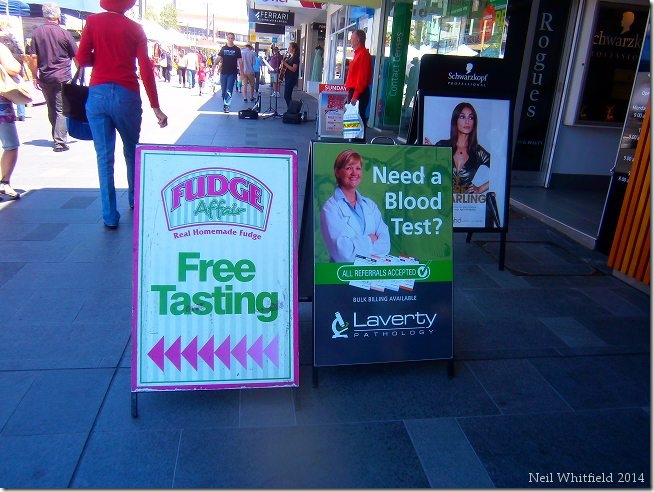 And the fudge really is excellent. Doug, an ex-student of mine from TIGS 40 years ago, is Mr Fudge Affair. He hadn’t noticed the juxtaposition with the sign from Harrison’s Pharmacy – which some may find a touch appropriate!

I didn’t see the actual opening of the completed Mall yesterday as I had lunch with friends at Steelers. But on the way there: 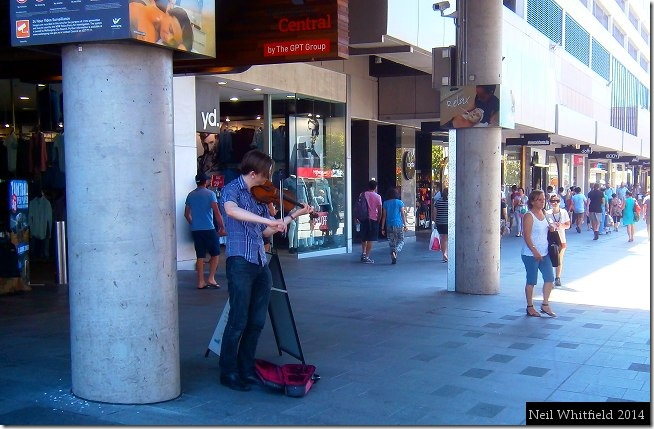 Could be a new form of alternative energy, though the cat (Garfield, would you believe?) seems to be conserving his. Sensible, given today’s forecasts.

By the sea, Saturday

But first a bit of a map highlighting places I tend to be at times. 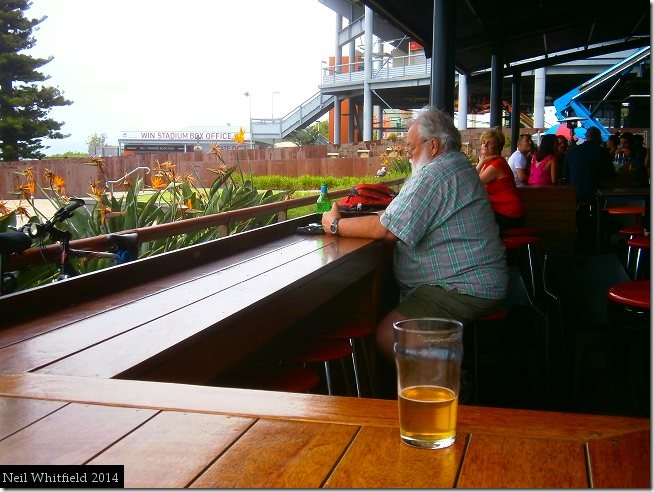 The OzElection situation is much as it was yesterday, but there was a bit of a bombshell in NSW: Greyhound racing ban: NSW trainers vow ‘industry will fight this to the finish’.

Greyhound racing will be banned in New South Wales from July 1 next year, with Premier Mike Baird saying the “widespread and systemic mistreatment of animals” cannot be tolerated.

I have never been interested in the sport and acknowledge the cruelty that has come to light, but I do wonder whether the Baird government has again been heavy-handed. One thinks of forced council mergers and lock-out laws, for example. This may be right:

Greyhound Racing in NSW has made great strides in animal welfare and integrity during the past 12 months but that means nothing now.

Millions of dollars was spent on the Special Commission and it seemed an absolute long shot that closure was an option. But here we are.

The outcome is catastrophic and the timing of the announcement, just five days after the ballot boxes closed on the federal election, is questionable. There is no doubt the government was protecting National Party seats that would have been disaffected by this news.

See also Greyhound racing industry banned and The key to Labor’s success in the west will have Baird worried. It is a big story down here in Illawarra.

Jose Ramos, who went to Dapto to watch the races tonight, said he was worried about the impact the ban would have on the local economy. “[It will] destroy it,” he said.

Peter Carlile, who was also at the track tonight, said he was worried about the impact on everyone involved in the industry.

“The dogs can go interstate,” he said. “What about the people who work at the track, not only here in Dapto but everywhere?”

So spectacular was it! Here it is as seen from my window in West Wollongong. 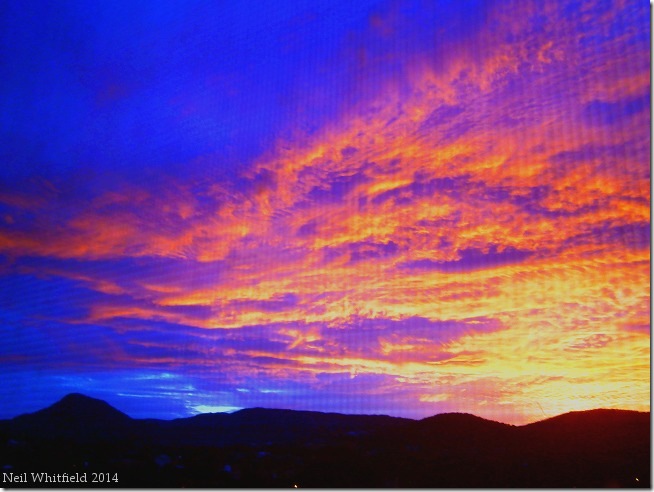 What can I say today? So I just share my world…

Of course I am exercised by the tragic events in Ukraine and Gaza – but what can I say? I have shared on Facebook and Twitter. So given my impotence… Let me just share what yesterday brought me.

Snow came close. Apparently Robertson, in those mountains just to the south of us, experienced snow.

Wollongong turns it on — 2

We spent the afternoon in conversation and also wonder at the nature and light show going on before our eyes. As you may see…

Noticed the light as I got off the 39 bus in Mount Keira Road yesterday around 4.30 pm. Looking more closely, observe on the left Nan Tien, the largest Buddhist temple in the Southern Hemisphere. 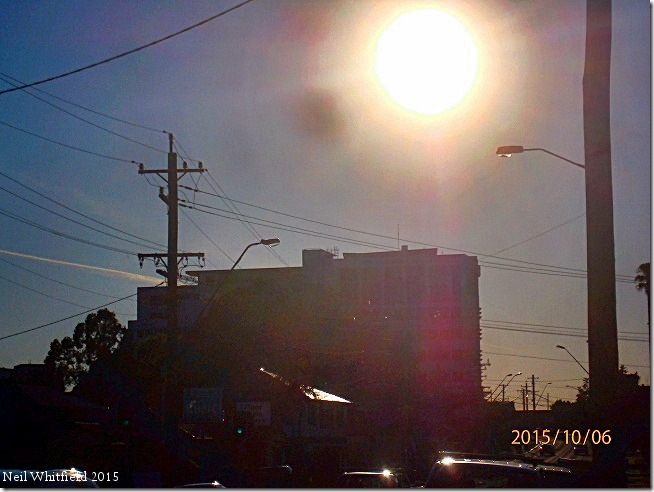 And this from the Illawarra Mercury: 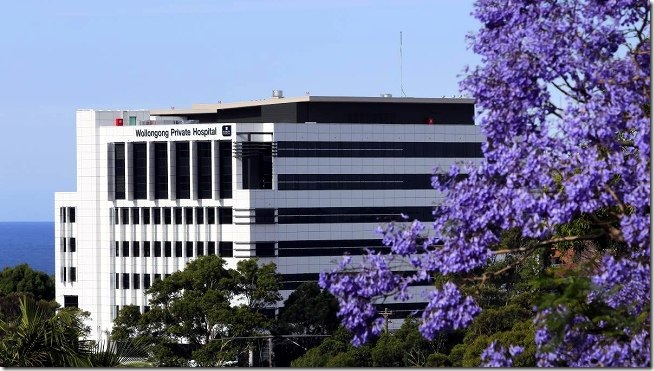 It is certainly impressive. How may it affect us public/pensioner patients? See Hospital opening boosts surgical options:

An increase in surgical options at Wollongong Private Hospital will have a positive flow-on effect for public patients, according to neurosurgeon Dr Matthias Jaeger.

Dr Jaeger said his unit of three neurosurgeons currently conducted more than 100 brain operations at Wollongong Public Hospital each year, with privately insured patients in need of emergency surgery making up 40 per cent of those.

‘’With the opening of Wollongong Private Hospital on Monday, we will be able to offer services for private patients which will open up a lot of operating time for public patients in the public hospital system,’’ Dr Jaeger said…

Any of us who were around forty years ago will know what this coming week is: the fortieth anniversary of the Dismissal. It is also one year today since Gough’s State Funeral: Gough Whitlam memorial service – in and out of Diggers. On the Dismissal I have posted, among others, Gough – a view from Wollongong.

Last night I posted on Facebook: “The entire Whitlam period coincided pretty much with my working at TIGS, with the denouement happening in my first year at Wollongong High. It’s like part of my own life has died today in a way…”  Also: “Great to see all Parliament rising to the occasion today in the Condolence Debate.”

Someone I taught at TIGS 1971-1974 posted: “It has just occurred to me that myself, [x] and many others like us would have accepted our scholarship and been teachers because our parents could not have afforded to pay Uni fees. I believe I owe my professional career for what it is worth to EGW.” He added: “And it has just occurred to me Neil James Whitfield, that I was sitting my HSC English exam when Gough was dismissed. I recall a teacher walked into the room and wrote this on the blackboard. He then turned and walked out. I recall looking up and thinking “what’s going to happen now”…”

I by then was at Wollongong High. I had forgotten that November 11 coincided with HSC English, but I do recall the shock of the Dismissal. There were significant Wollongong connections too. I see this in Whitlam’s first post-Dismissal press conference:

JOURNALIST: Prime Minister, you’d probably agree that you enjoy a fight. Are you looking forward to the election campaign and when will you officially launch the campaign?

WHITLAM: I can’t be sure when I’ll be making my first Public speech but I think I will be having something of political relevance to say at the Liverpool town Hall on Thursday when I’m at the naturalisation and at  Wollongong on Saturday night when I’m at a social function then. Certainly I like a fight. I’ve won a fair number of fights and I expect to win this one. I’ve never known so clear cut an issue. It’s not just what happens to my Government, what’s been done to my Government, it’s what can happen to any Government which thereafter is given a majority in the House of Representatives by the electors and which retains that majority in the House of Representatives. Parliamentary democracy is at stake in Australia here….

That Saturday after the Dismissal which Whitlam refers to must have been when I and so many others – colleagues from Wollongong High among them – stood chanting “We want Gough!” at the top of our voices outside Wollongong Town Hall.

I mention it because in today’s Sydney Morning Herald I read that it received a national award from the Australian Institute of Architects.

Winners of the 2015 National Architecture Awards have been revealed by the Australian Institute of Architects at an awards ceremony in Brisbane, celebrating the very best of Australian architectural design for 2015.

A total of 42 projects shared the 46 honours offered by the AIA as part of the national awards program, which saw firms from every corner of the country come together to celebrate contributions from Australian architects to the built environment.

Twelve named awards were handed out across 14 categories on the night which included an even spread of architecture practices and representation from different parts of the country.

Despite the shadows cast by the future of coal and the steelworks*, some major building is under way in Wollongong. 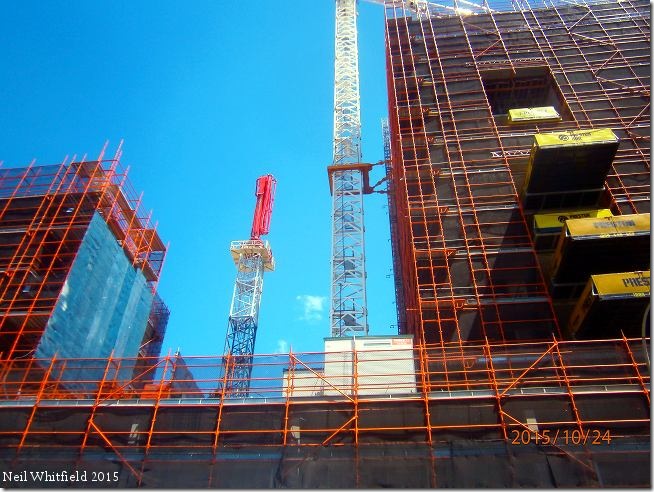 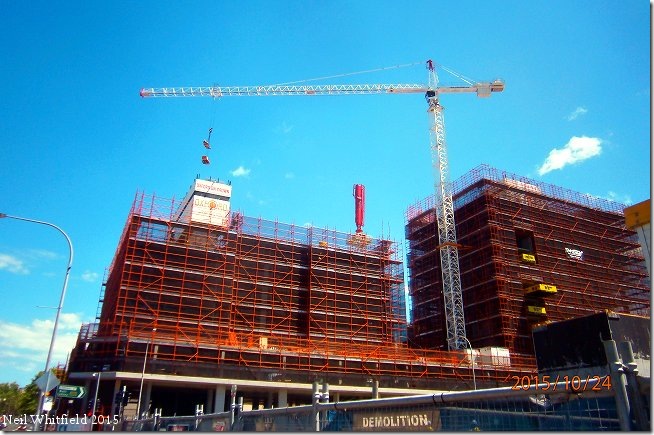 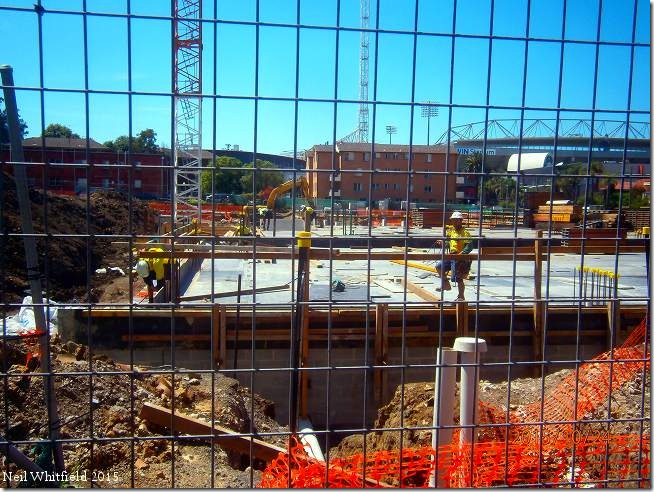