Yesterday saw me back at City Diggers for lunch.

More people did come in, including Colin and we shared what has become the signature dish here.

After lunch a quick chat with Sirdan in New Zealand, thanks to the phone running on the Club’s free wi-fi! Col had a word with him too….

And check the room above, so you can compare it with the first arty thing — the ongoing adventures with FotoSketcher.

That colour pencil render now serves also as my header on Facebook. And here is another, this time one of my recent window shots. UPDATE: FotoSketcher has given it a like on Facebook! Chuffed!

Now to music and a couple of people you have seen on this blog in the past — but not in a while.

He turned 21 in September.

A couple of days ago I downloaded a free program I used to have on previous laptops — FotoSketcher.

Here are some of my earlier efforts. For example:

2012 — from a photo by Bruce Part on Facebook of the Albury Hotel, Darlinghurst, back in the day.

So I started reacquainting myself with FotoSketcher, getting the spelling wrong in this dramatic sunset from my window!

Next day I played with my accidental selfie:

More later… But let me finish today with an old favourite:

Then Wollongong City Gallery, where so much great stuff may be seen right now. For example:

If you are in The Gong, do not miss this. It is amazing.

Then I felt the need to visit the hospital, where I stayed to around 7.30pm – but all seems well.

Go in tomorrow for a stress test though – just got the call.

All well so far

The stress test did show I am unfit but the heart seems OK.  Another test to go later on some time.

Meanwhile, here I am after the appointment in Diggers.

Having just had a beef casserole…

And at the bus stop as I set out for the hospital, a good omen?

So that immediately makes me think of tipping — not that I follow the horses, but rather the hobby I have developed thanks to the clubs here in The Gong of footy tipping. Well, given the lockdown here in NSW the Illawarra League tipping comp, which I mention from time to time, went into limbo, but I have carried on for several weeks. But today, bad news, given that lockdown had sent the entire Rugby League competition to Queensland — large parts of which have now also gone into lockdown!

Which means today’s games have been called off, and tomorrow’s most likely — and then it is still up in the air what happens next! But as one commentator on ABC Sports Radio said yesterday, you may as well tear up the rest of the draw — that is Rounds 21-25, which conclude the ones we tip on in our competition. Mind you, I was not doing all that well this last week.

However, this blog has done OK in the past month, partly thanks to the lockdown! After all, what is there to do but blog? As of yesterday afternoon July 2021 was the second-best month for views and visits so far this year, after March. NOTE: Yesterday evening I did an extra post on the Mount Kembla Mine Disaster of 31 July 1902. It could attract quite a few visitors rendering these stats out of date!

Well, there are memories of course — tips I got right, and famous Bunnies victories.

The latest on the NRL:

The NRL will introduce new Level 4+ protocols as part of an agreement with the Queensland Government for round 20 of the Telstra Premiership to be completed on Sunday and Monday.

The three originally scheduled Saturday games will now be played on Sunday at Suncorp Stadium, headlined by a 4.05pm Storm v Panthers blockbuster.

Sunday’s fixtures have been switched to Monday to ensure the entire round is completed ahead of round 21.

That painting of a Palm Cockatoo is by my sister-in-law Aileen.

There is quite a back story to this painting. First you have to understand that my brother Ian and Aileen married in 1955 when I was 12. Their marriage lasted for around ten years, producing four children, two now in Queensland and two in NSW. And lots of the next generation all over the place — some I have only discovered through Facebook quite recently.

I did not see Aileen, with one exception at the Cecil Hotel in Cronulla in 1978-9, after the marriage ended — so that’s over FIFTY years! In the past couple of months I have spoken to her on the phone. She lives around 100 kilometres further down the NSW south coast and was affected by the summer bushfires of 2019-20. Contact arose when her youngest, Maree, got in touch — through Facebook.

In due course Maree posted this image on her feed:

I praised it, and next thing I knew Aileen was asking me if I would like to have it. Well, what would you have said? There was a mix-up over my address and the package was returned to Aileen by Australia Post. We sorted that and the package was delivered to the local post office last Friday — but not to Wollongong Post Office. Instead it went to Keiraville, a nearby suburb just north of West Wollongong, but not on my usual bus routes. Then came the rain! So it wasn’t until yesterday that I got to Keiraville to collect.

Had coffee with the package — much bigger than I expected! And the coffee was a nostalgia trip in itself because they source from the excellent The Coffee Roaster which back in Elizabeth Street Surry Hills days was my coffee shop of choice, being in the same complex I lived in!  So I think I will be returning to Keiraville shops which is, as you can see above, charming. “The Village”, they call it. 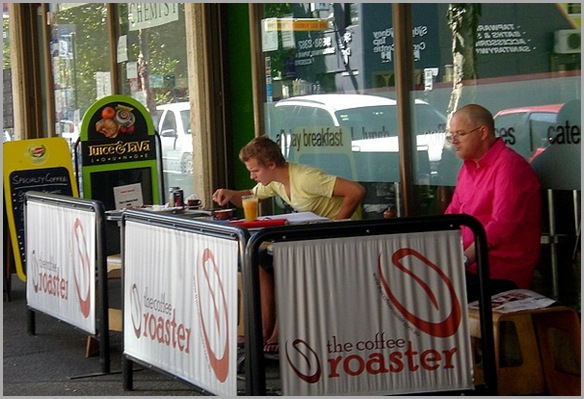 March 2009: where Coffee Roaster used to be! Memories!

I caught the 10 bus to Wollongong — there being just one other passenger, a lady who had been living in Keiraville for 58 years! One more joined us on the way. I was masked, and social distancing was not a problem. What a scenic, wandering route the 10 takes!

Lunch at City Diggers, where on Facebook I shared the day’s doings.

So now I am at Diggers — well fed with an odd but tasty dish of curried sausage and jasmine rice!

The #10 bus from Keiraville to Wollongong proved to be very scenic. In this photo I am in the Keiraville coffee shop with the Mystery Package — collected at last. Let’s just say it is from someone I hadn’t seen or spoken to since 1978-9 — and that in Cronulla at the Cecil Hotel. I suspect we are all getting far too old to be hanging on to past issues. And this is a gift I am glad to have. More later perhaps.

It’s bigger than I expected though so that limits today’s shopping.

What is in the Mystery Package. I am still at Diggers and about to go, but decided not to leave you in suspense. Thanks to my niece Maree I can share an image of quite a wonderful painting by my (former) sister-in-law Aileen, who quite literally until very recently I had not spoken to since 1978-9. I won’t bother you with the details, except to say none of it was really anyone’s fault. Aileen is now 81. I think we have both decided life is very very short….

But what a painting!

And I am now the recipient of it….

🙂 I suspect my brother Ian would not be unhappy. Hope the same is true of all our family — though I have a strict policy of not taking sides. How can I? I was only 11 or 12 when Ian and Aileen were married.

That painting, whatever, is bloody good!

So thanks to Facebook the painting has overnight been seen in New York, California, India — and one LIKE in particular was rather nice. Here is why:

On Facebook I wrote: “I have mentioned this to Maree, but you may as well all know. One of the Facebook friends who has liked this post, Louise D., aside from being a Professor at Macquarie University, lives in the Auburn Street Sutherland house that was Ian’s and my childhood home! How is that for closing the circle, or something.”