I’ve left the “lifetime saved” in this time, though I usually omit it as being rather more speculative than real. And the “two weeks short?” The “money saved” is based on two X25 packs of “Only the Best Will Do!” at current Australian prices. Yes, at my peak (or nadir) that was my consumption. That’s near enough to $45-50 a day. And the $50,000? Well, I wish it was in the bank – but imagine if I had continued to spend on ciggies, or even the less costly rollies! How many little old ladies’ purses would I have had to snatch? 😉

Cigarettes are the most lethal consumer product on the planet. Every year, over five million customers of the tobacco industry die. Around the world, governments have responded to the carnage by pushing up prices, banning advertising, and banning smoking in pubs, restaurants and work places. Yet despite this, the industry continues to thrive.

In 2012, tobacco pulled in three quarters of a trillion dollars in retail sales. The manufacturers turned that into a 50 billion dollar profit.

In this special edition of Four Corners, running over two nights, award-winning reporter Peter Taylor investigates the state of the industry. He talks to the head of British American Tobacco, who delivers a clear admission that smoking is harmful to health, along with this pledge:

“I think we are different because we are at the forefront of driving that tobacco harm reduction future  sand I understand that we are indeed the problem. That is no reason for us not to be part of the solution.”…

This is one of the plain packaging images currently in use in Australia. A smoker friend at the Diggers Club had such a pack the other day and we discussed the image. We had to agree it is an extreme case: 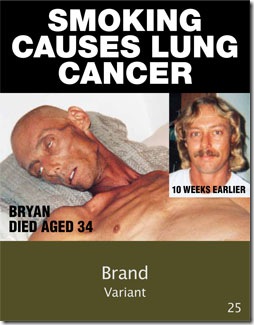 And yes, it is an American image: see the story.

…Over the last few weeks, several smokers have told me “You know that skinny guy on the cigarette packs died of AIDS, not lung cancer and now his family are suing the government “(or sometimes it is the tobacco companies).

That story sounded a bit suspect to me, a rumour made up to try and deny that these illnesses can be caused by smoking. So I did a bit of research.

The man on the packets is Bryan Curtis. He was from St Petersburg in the US. He had been smoking since he was 13, building up to two packs a day. On 2 April 1999, at 33 he was diagnosed with an aggressive form of cancer that attacked his lungs and liver. He died on 3 June 1999.

The story is well documented in the St Petersburg Times. There is no mention of AIDS.

The only reference to him having AIDS, come from comments on sites where people say “He died of AIDS not lung cancer, the government is conning us” and similar things.

But to believe the rumour they are several leaps of faith you have to make.

You have to believe that the government would not have thoroughly researched the illness of a person whose image they were going to use AND they would have used it without permission of the family.

You would have to believe that the family would sue the government and not ask for an interim injunction to have his image not used while the case is decided.

And you would have to believe that such a law suit could take place without any of the mainstream media (or ANY media) realising up that such a high-profile case was underway.

And of course you also have to ignore all of the stories from credible news sources that say he died of lung cancer and overlook the fact that none of them mention AIDS.

There is a YouTube video about Bryan, which uses much of the material from the St Petersburg Times article.

One of the comments was from an Australian claiming he knows Bryan died of AIDS because the government is being sued etc. He wrote “If you don’t believe me, look it up.” Which is what I did, and found no evidence to support his claim.

I pointed him to the story I had found and asked if he any reference to back up his claim. At this point he suggested that since “I believe what I’ve seen and heard” we should “agree to disagree”.

Some people are happy to blindly believe in something in the absence of proof, but I have never found it a virtue. As Daniel Moynihan said, “Everyone is entitled to his own opinion, but not his own facts.”

Four years in The Gong

I checked in that memory bank also known as my blog.

I’m posting this here and on the photo blog. The view from my window at 6.30 am.

See also Home relocation progressing. And I had forgotten how long the transfer took:

State of play at The Bates Motel

Today I went back to Surry Hills and oversaw the transfer of about 200 vinyl records plus many boxes of books to the good folk at 2MBS-FM.

Tomorrow I return for coaching, then on Friday/Saturday armed with many garbage bags and cleaning stuff I attack the bomb site that has been home for eighteen years…

Four years on I do have to admit to feeling older if not wiser, and more and more I have become a Wollongong local. My last visit to Sydney High earlier this month indicated that by next year I will actually know fewer people there as many long-standing friends/colleagues move on. So it goes.

Yesterday on the other hand was a good time of chat at Illawarra Diggers. Discovered one old regular who in his day was a scientist with the CSIRO and also a long-term resident of Montreal…

So the land of my (possibly) Dharawal ancestors has me, it seems. Not to mention of ancestors I actually remember!

You know what I mean. The stats are on US time so a bit behind Wollongong.

Yes, at (shudder) two packs per day of Benson and Hedges 25s at current prices… Extra Mild of course! (Hahaha!)

Last Saturday I was treated to lunch in the Red Dragon Restaurant at Steelers.

Great food as ever, and very multicultural company, my companions coming from Iran, Korea, Bangladesh and Australia – albeit the last being German-Cambodian. Such a shame the whole world can’t be as harmonious as that little group in a Wollongong footie club!

Two of my companions disappeared outside every little while for a smoke. I could empathise as once I would have been joining them for sure, but when the subject was raised by one of them I did tell my story – 50 a day (preferably Benson and Hedges), then 2011 and the cardiac ward and successfully stopping if rather after the horse had bolted…

But as promised, today being by our calendar my 41 month anniversary, I will post the stats. Quitnet, my keeper of stats, calculates in US Eastern Standard time so it says I’m not quite there yet, so you should add 50 ciggies to the total.

As I mentioned yesterday, I devote the better part of the day to hospital business. I had not noted that yesterday was also a Quit Anniversary. Quitnet emailed this morning:

Still on yesterday, here are some photos taken in West Wollongong on my way to the Yum Yum Cafe.

Begun in July 2013, these units in Crown Street West are making progress 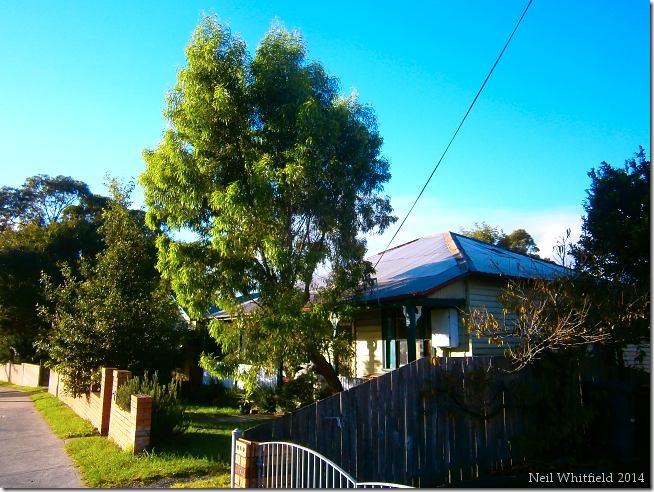 Buying the newspaper this morning I was quite shocked when the person in front of me bought a 20 pack of a low-end quality cigarette brand for $19.90.  That is near enough to a dollar per fag!

So when last August Voice of Russia reported Pack of 20 cigarettes to cost $20 by 2017 in Australia they fell a bit short in their prediction. It is already on us!

Pleased to see the UK is likely to start plain paper packaging too.

Meanwhile, my own rather late in life quit is ongoing: