And I am so over the recycling that happens every year — which is a cue of course to recycle myself!

2017 for example: Australia Day: I like it. And there I link to 2014: Anniversary Day/Survival Day

Some things are not new: Edward Palmer (1842-1899) was a conservative Queensland politician, squatter and public servant. In his Early Days in North Queensland (available from Project Gutenberg) he wrote:

The treatment of the native races has always been a difficult question. Whenever new districts were settled, the blacks had to move on to make room; the result was war between the races. The white race were the aggressors, as they were the invaders of the blacks’ hunting territory.

Yes, the INVASION word! But he went on to rationalise thus:

The pioneers cannot be condemned for taking the law into their own hands and defending themselves in the only way open to them, for the blacks own no law themselves but the law of might…. The vices and diseases of the white race have been far more fatal to the blacks than the rifles of the pioneers, more particularly when they were allowed about the towns, where they always exhibit the worst traits of their character, becoming miserable creatures, useless for any purpose, and an eyesore to everyone. Those employed on stations as stockriders and horse-hunters become very useful and clever at the business…

I don’t have a problem with recognising the 26 January 1788 event — can walk and chew gum at the same time! It is BOTH a solemn day of reflection AND a day to celebrate the achievements of all Australians. And as I said in 2014:

I was there that day and joined all these people in their march. 26 years ago on the 26th! 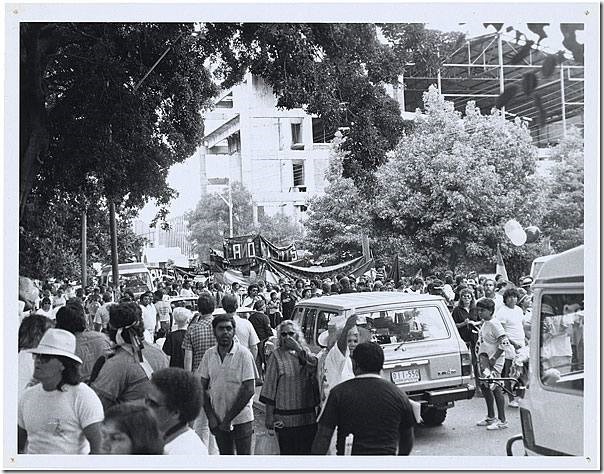 But none of us are going anywhere, are we?

There may be a time in the future when we have an opportunity to forge a new national day, free of the ambivalence that accompanies Australia Day. But for now, January 26 is it. Let’s use it as an occasion to celebrate our achievements and reflect on the things that we share as Australians.

Let’s also use it to ask whether our country is living up to the best of its traditions. In the words of one patriot, ”My country, right or wrong: if right, to be kept right; and if wrong, to be set right.”

One thought on “So Australia Day is coming up again…”