For the record — history worth preserving:

President Donald J. Trump of the United States of America and Chairman Kim Jong Un of the State Affairs Commission of the Democratic People’s Republic of Korea (DPRK) held a first, historic summit in Singapore on June 12, 2018.

President Trump and Chairman Kim Jong Un conducted a comprehensive, in-depth, and sincere exchange of opinions on the issues related to the establishment of new U.S.-DPRK relations and the building of a lasting and robust peace regime on the Korean Peninsula. President Trump committed to provide security guarantees to the DPRK, and Chairman Kim Jong Un reaffirmed his firm and unwavering commitment to complete denuclearization of the Korean Peninsula.

Convinced that the establishment of new U.S.-DPRK relations will contribute to the peace and prosperity of the Korean Peninsula and of the world, and recognizing that mutual confidence building can promote the denuclearization of the Korean Peninsula, President Trump and Chairman Kim Jong Un state the following:

1. The United States and the DPRK commit to establish new U.S.-DPRK relations in accordance with the desire of the peoples of the two countries for peace and prosperity.

2. The United States and the DPRK will join their efforts to build a lasting and stable peace regime on the Korean Peninsula.

3. Reaffirming the April 27, 2018 Panmunjom Declaration, the DPRK commits to work towards complete denuclearization of the Korean Peninsula.

4. The United States and the DPRK commit to recovering POW/MIA remains, including the immediate repatriation of those already identified.

Having acknowledged that the U.S.-DPRK summit — the first in history — was an epochal event of great significance and overcoming decades of tensions and hostilities between the two countries and for the opening of a new future, President Trump and Chairman Kim Jong Un commit to implement the stipulations in this joint statement fully and expeditiously. The United States and the DPRK commit to hold follow-on negotiations led by the U.S. Secretary of State, Mike Pompeo, and a relevant high-level DPRK official, at the earliest possible date, to implement the outcomes of the U.S.-DPRK summit.

President Donald J. Trump of the United States of America and Chairman Kim Jong Un of the State Affairs Commission of the Democratic People’s Republic of Korea have committed to cooperate for the development of new U.S.-DPRK relations and for the promotion of peace, prosperity, and security of the Korean Peninsula and of the world.

Yes, I spent a lot of yesterday watching the rolling coverage on ABC News 24, and this morning I rose early to watch France24, Al Jazeera, and BBC courtesy of SBS.

So many opinions about what it might mean! Is it comparable to this, for example? 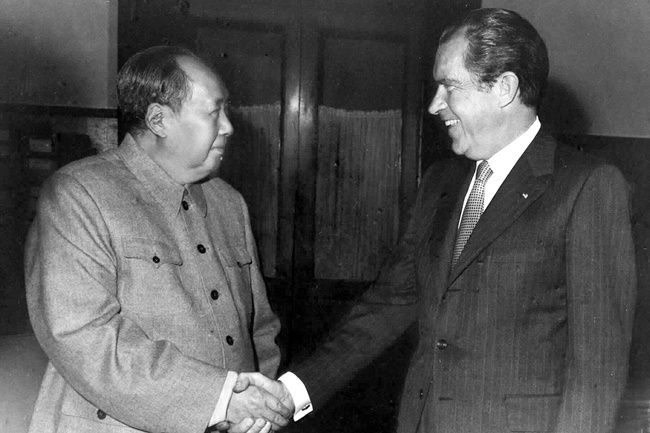 Or should we be reminded of another famous meeting? See Singapore summit echoes Hitler-Chamberlain meeting in 1938, but offering ‘lots of great condos’ in our time.

Our Foreign Minister was quite judicious on Channel Nine this morning, I felt.

Foreign Minister Julie Bishop is “cautiously optimistic” following yesterday’s summit between Kim Jong-un and Donald Trump, but believes the truly historic day will be when the last of North Korea’s nuclear weapons is dismantled….

Ms Bishop described the summit as the first positive development involving North Korea in more than a decade, but said the test would be verification Pyongyang’s nuclear weapons program had been destroyed.

“We’ll have to see the concrete steps that North Korea takes,” she told the ABC.

Peter Hartcher in The Sydney Morning Herald was even more cautious. I was even more impressed by what he wrote yesterday. Do read that.

And then there is the New York Times.

We can but hope! Question is, is Donald J Trump now an American Augustus, or is he instead (or also!) the latest incarnation of P T Barnum? There is no doubt about one thing: yesterday on my TV I saw the Greatest Show on Earth, that’s for sure. I hope like I am sure you do that it will turn out to have been much more than a show.

Well worth reading Justice Michael Kirby, who headed the Commission of Inquiry on Human Rights in the Democratic People’s Republic of Korea  a few years ago: I’ll rejoice in Trump’s triumph when Kim opens his gulags to scrutiny.

Many have learned to live with the bomb. But its fearsome power demands urgent global responses if our species is to survive.

Against this background, one has to welcome the initiative taken by President Donald Trump to hold a meeting with the supreme leader of North Korea, Kim Jong-un in Singapore this week. Jaw, jaw is, as Churchill declared, much better than war, war. Especially in the age of nuclear weapons. Particularly because North Korea now possesses a number of these weapons and missiles to deliver them far from its own borders.

President Trump got the North Korean leader to the conference table. He has declared that the meeting was a great success. But what has really been achieved?…

And further to our Foreign Minister Julie Bishop:

Ms Bishop has been determinedly circumspect in the face of the unprecedented geopolitical upheaval, sticking to careful talking points.

Not on Thursday. You could hear disbelieving chortles in the audience. This was Julie Bishop Unleashed.

She admitted it was disorienting to see the leader of the free world chumming up to a man who oversees a vast gulag of political prisoners.

Particularly in the wake of an acrimonious G7 meeting which saw Donald Trump take furious pot shots at Canadian Prime Minister Justin Trudeau, who is not exactly a traditional enemy of the United States.

“The US trade representative said there was a special place in hell for Justin Trudeau, while President Trump said he had a special bond with Kim Jong-un, aka Little Rocket Man,” Ms Bishop said.

She then veered into gentle mockery, admitting she had been transfixed by the pictures beamed back from Singapore.

“After a while I became quite mesmerised by the contrasting hair styles of the two leaders,” Ms Bishop said….

One thought on “That was quite a show!”