Wow, some things I have practically forgotten! Here are some bits from Floating Life, my blog at the time.

I recovered from an anaesthetic just over two hours ago, so I trust today’s posts make sense. I do feel OK, and Lord Malcolm delivered me from Bondi to the Juice and Java Lounge in Surry Hills where I ate my first meal since last night’s excellent steak.

By the way, yesterday’s yum cha again: Sirdan did turn up, but not where we did! So some time in the near future we will make use of Ben’s gift.

The endoscopy went OK: one or two matters — a small hiatus hernia, not surprising, and some gastritis, which may be the result of Friday night’s poisonous chili sauce. He took a biopsy or two as well, but nothing promises to be too evil. 🙂

Yesterday I was meant to meet early in the morning with The Poet [RJS, former Principal of SBHS] to talk him through how to use the site I set up for him but the probably final illness of his mother-in-law prevented this happening. He is off to the USA shortly to visit his son as well, then moving to Victoria.

Later we were to have coffee with Phil Day*; I went to that. W, the ex-deputy, was there too. Phil’s farewell dinner is Friday week. He will be having another bout of chemotherapy earlier that week, but insists he will be at the dinner. As I said, positive.

*See also these posts from February 2007: Celebration of an amazing man and There were four eulogies yesterday… 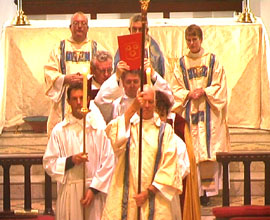 The link above takes you back to August, when I mentioned Scott Poynting, an ex-student from Wollongong who is now at the University of Western Sydney. Imagine how pleased I was to receive this email the other day.

I had heard from a 1972 classmate about your blog site, but only came across it googling to see whether anyone was mentioning our books (the sort of thing one does when there’s marking to be done). Thank you for the nice things you said about them.

Teaching is far too thankless a pursuit (in comparison to its value). With your extensive networks now, however, you must hear from more ex-students than most. This one wants to thank you for reading aloud to us from ‘The Sound and the Fury’ in 1972, and the love of literature to which that contributed. I went on (after a false start – a floating life, if you like) to study English at UNSW, and studied this novel in first year. I later read all the Faulkner I could get my hands on. Later still, I studied American Literature at Macquarie. Another false start, but a floating I don’t regret.

Thank you, also, for reading to us in 1972 from ‘The Outcasts of Foolgarah’. I later went on to read all the Frank Hardy novels I could get my hands on (and most were better than ‘Outcasts’, though the politics attracted me). By that time I was teaching mathematics – another false start. I read a bit of ‘Outcasts’ to my students last year, in a subject on ‘Social Inequalities’, during a week in which we contrast Woollahra and Bankstown.

Yes, you taught me English. Thank you.

Then after coaching today Ben returned a few books and gave me enough free yum chas to sustain an army; I will be sharing with M, but there is enough in the pot to cover one of the Sunday lunches with Sirdan and Lord Malcolm as well! I also had an email from another coachee, Erwin, who is reading “Paradise Lost”. Indeed, indeed.

This extraordinarily wise book, On Identity (London, Harvill, 2000), is more relevant today than ever.

Sometimes, when I have finished explaining in detail why I fully claim all of my elements, someone comes up to me and whispers in a friendly way: “You were right to say all this, but deep inside of yourself, what do you really feel you are?”

This question made me smile for a long time. Today, it no longer does. It reveals to me a dangerous and common attitude men have. When I am asked who I am “deep inside of myself,” it means there is, deep inside each one of us, one “belonging” that matters, our profound truth, in a way, our “essence” that is determined once and for all at our birth and never changes. As for the rest, all of the rest — the path of a free man, the beliefs he acquires, his preferences, his own sensitivity, his affinities, his life — all these things do not count. And when we push our contemporaries to state their identity, which we do very often these days, we are asking them to search deep inside of themselves for this so-called fundamental belonging, that is often religious, nationalistic, racial or ethnic and to boast it, even to a point of provocation.

Whoever claims a more complex identity becomes marginalized. A young man born in France of Algerian parents is obviously part of two cultures and should be able to assume both. I said both to be clear, but the components of his personality are numerous. The language, the beliefs, the lifestyle, the relation with the family, the artistic and culinary taste, the influences — French, European, Occidental — blend in him with other influences — Arabic, Berber, African, Muslim. This could be an enriching and fertile experience if the young man feels free to live it fully, if he is encouraged to take upon himself his diversity; on the other side, his route can be traumatic if each time he claims he is French, some look at him as a traitor or a renegade, and also if each time he emphasizes his links with Algeria, its history, its culture, he feels a lack of understanding, mistrust or hostility…

…people who belong to different components of society that are violently opposing one another today; people at the border in a way, crossed by lines of ethnic, religious or other fractures. Because of this situation, that I do not dare call “privileged,” these people have a special role to play: building bonds, resolving misunderstandings, reasoning with some, moderating others, smoothing and mending conflicts. Their inherent vocation is to be links, bridges, mediators between different communities and different cultures. This is why their dilemma is full of significance. If these people cannot live their multiple belongings, if they constantly have to choose between one side or the other, if they are ordered to get back to their tribe, we have the right to be worried about the basic way the world functions.

“Have to choose,” “ordered to get back,” I was saying. By whom? Not only by fanatics and xenophobes of all sides, but by you and me, each one of us. Precisely, because these habits of thinking are deeply rooted in all of us, because of this narrow, exclusive, bigoted, simplified conception that reduces the whole identity to a single belonging declared with rage.

I feel like screaming aloud: This is how you “manufacture” slaughterers! I admit it is an abrupt affirmation but I will be explaining it in this book.

The tragedy of fools — and he is a fool — like Abdul Nacer Benbrika and the fools who regard such a person as anything other than a deranged bigot, is this total inability, it would appear, to live with “multiple belongings.” But let us not feel too superior: as Maalouf says, “…these habits of thinking are deeply rooted in all of us, because of this narrow, exclusive, bigoted, simplified conception that reduces the whole identity to a single belonging declared with rage.” The Sydney Daily Telegraph does just this too in its own way, sacrificing our own guarantee of some sort of just system in the process: these people have been arrested and charged, and that is the end of the story for the time being. We really should not comment on what they may or may not have been up to until it is tested in the proper forum, which is not the Daily Telegraph, talk-back radio, or this or any other blog.

At the same time, any of us belonging to one of the three major religions that believe, or once believed, that God has been in the habit of leaving infallible bits of writing lying around for fallible humans to screw up on, think again. Realise how dangerous this ahistorical, uncritical delusion about pure texts actually has been and still is.

NOTE: Now you can read chunks of Amin Maalouf — enough to get his drift — on Google Books: In the Name of Identity: Violence and the Need to Belong.