A very interesting crime/thriller from Hong Kong to read, and two great dvds to view.

Duncan Jepson “was the editor of the Asia-based culture and fashion magazine WestEast and one of the founders and managing editors of the Asia Literary Review. He is a social commentator on Asia and writes for The New York Times, The Daily Telegraph, Publishing Perspectives, South China Morning Post and Hong Kong Tatler. A lawyer by profession, he lives in Hong Kong.”  I find the concept of  Emperors Once More, set in near-future Hong Kong, quite fascinating. See this review:

All the pivotal characters in Duncan Jepson’s new Hong Kong crime novel—including its cosmopolitan protagonist—are preoccupied with indignities China has suffered at the hands of foreign powers, from the Opium Wars to a fictional 21st century European debt default.

Emperors Once More is set in near-future Hong Kong, a “formerly fragrant harbour” in decline after its “zenith in early 2013”. The main action occupies the two days leading up to an 18 August 2017 crisis meeting between G8 nations—that is, the West—and so-called “Outreach Five” nations, the most powerful of which is China.

Europe has just defaulted on the debt it owed China, and someone, or some group, is determined to make the continent and all Western powers pay for the debt and every other perceived shame that has been inflicted on China.

The methods of extracting that payment are extremely bizarre, misguided and grisly…

A really good Australian movie next: “You’ve got to give full marks for the look of the film. It looks absolutely great.” – David Stratton.

See the movie web site and the SBS review.

In the trenches of a bloody WWI battle.

Some of the greatest Australian movies of all time have tackled war, most notably Gallipoli and Breaker Morant, but apart from 2006’s Kokoda the subject has been ignored in recent years, unlike American filmmakers who’ve been obsessed with conflicts in the Middle East, usually with disastrous box-office results.

So it’s refreshing to report that Beneath Hill 60 is a superbly crafted, tension-filled drama based on a little-known episode of the First World War. In just his second film after Last Train to Freo, director Jeremy Sims orchestrates a series of impressively realistic battle scenes and draws marvellous performances from his ensemble cast. Often using close-ups, Sims and director of photography Toby Oliver succeed in putting the audience literally into the trenches, tunnels and mud with the protagonists.

It must be noted there are several minor flaws: the narrative gets bogged down in the last third before the explosive finale; at 33, Brendan Cowell looks a good deal older than his character, Lieutenant (later Captain) Oliver Woodward, who’s about 26; as his 16 going on 17-year-old girlfriend Marjorie, 20-year-old Bella Heathcote is too mature to pass for a teenager; and that gifted actor Chris Haywood is asked to strut around huffing and puffing like the proverbial Colonel Blimp.

The screenplay by David Roach focuses on a bunch of Queensland miners who join the Army’s new, top-secret Australian Tunneling Company. After minimal training they’re sent to the Western Front in Europe in 1916…

Actually some of them came from Wollongong….

“Harrison Gilbertson is superb as the fresh-faced Frank Tiffin, who enlisted when he was 16 and transforms from being a scared, whimpering kid into a truly heroic man.”

Rotten Tomatoes calculates Beneath Hill 60 at “85% fresh”. On the second of my two movies the sum is 46%. Seems not everyone likes Creation. See also the lovely David and Margaret:

The story behind the writing of ‘ON THE ORIGIN OF SPECIES’ by Charles Darwin is the centrepiece of CREATION, from British director Jon Amiel. Darwin, played by PAUL BETTANY, is at a crisis point in his life. His favourite daughter Annie – MARTHA WEST – has died, despite extreme treatment, and Darwin is bereft. Annie had been the child most interested in his work and she maintains a ghostly presence throughout the film.

But it’s not only the trauma of losing Annie that is causing Darwin grief, he’s aware of the explosive nature of his work. Will it destroy people’s belief in religion? This is a sensitive matter because Darwin’s wife Emma – JENNIFER CONNELLY – is deeply religious and one of his great friends is the local minister Reverend Innes – JEREMY NORTHAM.

Adapted to the screen from Randall Keynes biography of his great-great-grandfather by Australia-based screenwriter John Collee Creation is, for the most part, a fascinating, lovely but, in many ways painful, film. Life in mid-19th century England has been meticulously recreated, the performances are impressive, the journey emotional.

The scenes with Darwin and an ape are particularly touching. Paul Bettany and Jennifer Connelly are partners in real life and they work well together and young Martha West is notable as Annie.

The film indulges in one little bit of overkill towards the end, so unnecessary, but overall Creation is a very fine film indeed.

I was impressed enough to want to see it again – as also Beneath Hill 60. How amazing the 19th century really was!

A contributor to IMDb.

I saw this film on 19SEP2009 at the Cambridge Film Festival.

The Beagle’s only in a couple of short flashbacks, the whole thing is about Darwin’s life from 1841 to 1859, when he was ensconced in Kent with his growing family, 200+ pages of Origin had already been drafted and he was wondering whether to complete the book.

The script is based on Randal Keynes’s book Annie’s Box (Annie, Charles’s daughter, died when she was 10). It is mostly a family drama, but does include sex scenes – however, the participants are married, both on and off screen. Not too exciting, not much science but a well-made film that’s pleasant to watch and pushes the right emotional buttons. A bit of a romantic weepie, actually. I suppose the conclusion is that you can be an agnostic free-thinking scientist from an atheist family background and still be an emotional romantic as well as an excellent father.

Some of the characters and Darwin himself state or wonder whether he “killed god” but the viewer is able to doubt that. What is beyond doubt, given the deadly struggle for survival and the web of predation on the meadow-bank (well-known before Darwin and completely uncontroversial) and the failure of Darwin’s prayers is that the idea of a kind, providential god who loves “his” creatures is untenable.

I really cannot see many Americans objecting to it very much. Some may have problems with the title, which is probably the most controversial thing about the film, or with the fact that Bettany does not have horns, a tail and a pitchfork. 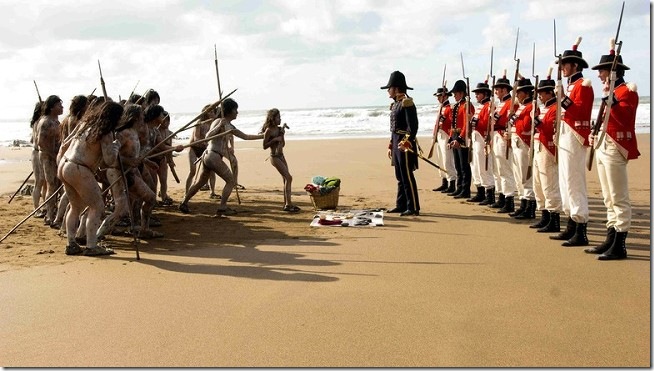 From Creation: Captain FitzRoy and the Fuegians: see Jeremy Button for the sad story.