These days SBS carries quite a few excellent documentaries, particularly at 7.30 pm. This is not what SBS was originally meant to do, but it is a public service to do so. Last night I saw Part 3 of the 2013 BBC three-parter Byzantium: A Tale of Three Cities with Simon Sebag Montefiore. 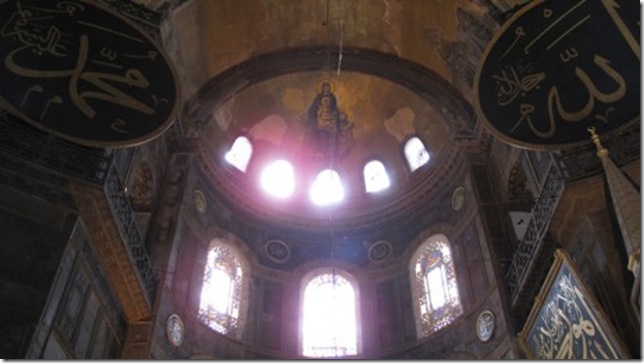 Although we remained pretty much on land throughout Byzantium: A Tale of Three Cities (BBC4), give or take a few crossings of the Bosphorus, this second episode of the three-part documentary series also had a somewhat nautical feel. To be precise, it had all the hallmarks of an upmarket cruise ship lecture. Simon Sebag Montefiore is a good historian who writes very well, but he appears uncomfortable as a presenter.

Too posh to be chummy or demotic and too polite to impose himself on his audience and demand to be heard, he appeared almost diffident as he talked his way round Istanbul. He tried talking with his Panama hat on. He tried talking with it off. But whichever way he tried, he still looked tired and apologetic. As if he understood it was a history none of us knew much about and probably weren’t that interested in, but he was only doing his job and would try to make sure we all had more fun when the cruise ship made its next stop. I felt improved, but it cost us both.

Yes, it was a gallop through the millennia, but I was still enthralled, but ashamed of some of the glaring gaps in my own historical knowledge of such a significant crossroads of world history – and I probably know much more about it than the average Aussie.

Keep them coming, SBS!  I note that Tuesday sees the new Australian series of Who Do You Think You Are? beginning with Geoffrey Rush. Another reason I won’t be watching Channel Ten’s Spelling Bee – Monday and Tuesday – charming as I am sure it might be. But an hour and a half per episode? I’m not sure I could stand that, even if that’s probably one hour plus commercials.

And tonight’s #QandA on ABC promises to be a don’t miss: