I thought Episode 1 last night was brilliantly done. I particularly admired the recreation of Sydney in 1810, obviously based on paintings such as these, which The Secret River convincingly brought to life. I reflected on the fact that just over a decade later this was what my ancestor Jacob Whitfield would have seen and lived. 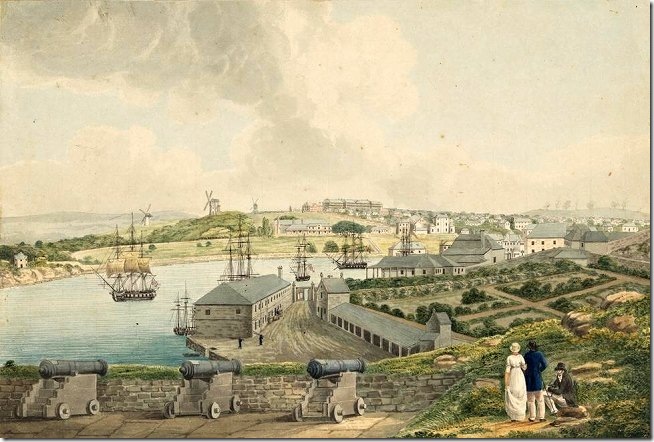 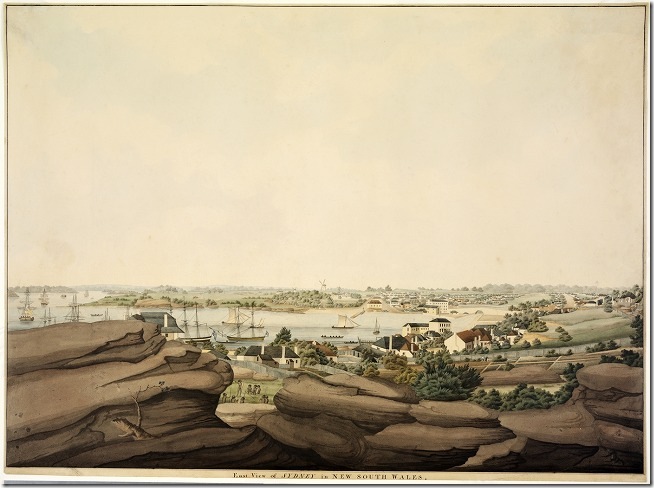 The top is a well-known image by convict artist Joseph Lycett; the second is “East view of Sydney in New South Wales, ca 1809” by John Eyre.

While we need to remember that The Secret River is fiction, not a history, it does strive for verisimilitude. The back story in history is discussed by the author in Searching for the Secret River.

It tells the story of the research behind the novel – from the transcript of Grenville’s ancestor’s trial at the Old Bailey in 1805, to the information that contemporary historians are uncovering about what happened on the Australian frontier. It also takes the reader through the process of turning that research into living fiction – the false starts, dead ends and failures as well as the strokes of luck, flashes of inspiration and surprises.

It contains sections of personal memoir, the record of the research, and a journal of the evolution of the book from non-fiction to novel. It quotes sections of early drafts and compares them with the final version, and goes into some detail about technical issues such as point of view, voice and dialogue.

There is also an excellent study guide (pdf) to accompany the current TV version. An extract:

The land adjacent to the Hawkesbury River was occupied for many thousands of years by the Darkinjung, Dharug, Eora, and Kuringgai Aboriginal peoples. They used the river as an important source of food and a place for trade. The Aboriginal name for the river was published as Deerubbun in 1870.

The Dharug tribe are the traditional custodians of the land on the south bank of the Hawkesbury River. The river, known to the Dharug as Deerubbun, and its nearby lagoons were a focal point for bands, clans or family groups to collect food such as fish, eels, shellfish and water birds. Yams and other plants growing on the fertile riverbanks.

The Aboriginal language spoken in the series is as close to Dharug as one can now get.

The Secret River is already listed on the International Movie Database with a ranking of 8.9/10 so far.

Looking at the scriptwriters one finds a Wollongong connection. The writers are Kate Grenville herself, Jan Sardi, and Mac Gudgeon who was born in Wollongong. Indeed when I arrived to teach in 1970 Mac Gudgeon and his father were quite famous. Mac Gudgeon Senior celebrated his 100th birthday in 2014.

After the war Mac worked at several pharmacies on the south coast and he and Edna had three children Maxine, Mac Junior and Jennifer.

They bought a pharmacy in Wollongong and called it Gudgeon’s Pharmacy and also opened a ballet and magic shop nearby. Mac and Edna were involved in the local community with Lions, Rotary and Mac was secretary of the Wollongong Rugby League Club.

Then came the 60s and 70s, the Vietnam War, and Mac set up an anti-conscription group where he was boycotted by many of his customers. But the wharfies and miners stepped in and moved their business to Gudgeon Pharmacy. Mac eventually sold the pharmacy and became a relieving pharmacist in New Guinea where he was so well liked that one family named their first born Gudgeon.