… and I had been walking right past it for years! 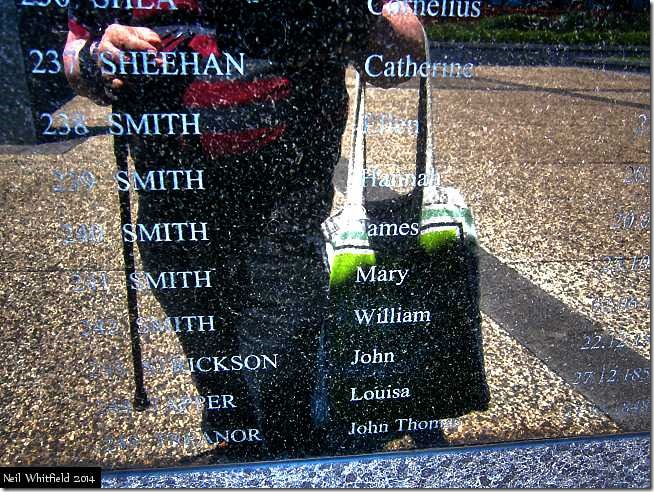 William Smith, a weaver by trade, was the son of

William Smith married Mary McGuire in 1802 in the

Parish of Aughananmullen, Co Monaghan. Mary was the daughter of

WIilliam was classed as a social prisoner, i.e. he spoke out against

the English for which he was transported to New South Wales in 1821 on the Isabella 2.

In 1823, Father Joseph Therry petitioned to have convicts’ wives

and children come to the colony with the result that Mary, four daughters

As I mentioned in Unexpected connections the point is that William Smith arrived on the same convict ship as my ancestor Jacob Whitfield and his wife and children were on the Thames, the same immigrant ship as were my great-great-grandfather William Whitfield and his sister Mary. Mind you, whoever wrote that inscription gets two things wrong: the convict ship should be Isabella or Isabella 1, not Isabella 2; the Thames arrived on 11 April 1826.

On the Thames I repost a 2011 comment by Bob Starling from my family history page:

An update on the information dated 30/11/2010 –DOCTOR LINTON THAMES SHIP’S SURGEON/DOCTOR RN – meticulous records were maintained by Dr. Linton with his report now held by the Mitchell Library – Special Collections on Microfilm AJCP PRO Reel 3214 Page 522 onwards (79/8555 Identifying number on film). The film is most difficult to read but with patience I was able to decipher records that are of interest. During the voyage there were 223 passengers put on the sick list with 207 being discharged from the Doctor’s treatment with 16 deaths being recorded 3 wives and 13 children. Fevers and fluxes (whatever this symptom represents*) were the main illnesses treated. The 16 deaths were spread across a broad number of categories that cannot be deciphered although fluxes and debility accounted for 8 deaths. Dysentery was prevalent amongst those treated. If Dr Linton treated 223 passengers there is no way that the Microfilm has captured all of the Doctors medical journals. Perhaps he treated several patients on multiple occasions for minor ailments and did not record their medical history as all told here were only 161 passengers on board and although there is no mention of the number of crew there was possibly no more that 20 crew. I have only identified 9 of the 13 children’s deaths. Dr. Linton’s Report comprises 111 pages and has been captured to a CD but only addresses 31 medical cases plus a pre sailing report and a report at the conclusion of the voyage. Perhaps there are other medical journals maintained by Dr Linton that have not been microfilmed by the Mitchell Library. I have asked the Mitchell Library to see if they can locate the original Surgeon’s Report so that I can examine it with the view to locating the possible death of Mary Whitfield**.
The “Thames” was the 1st ship to carry wives and children of convicts that had sought permission to bring their family to Sydney. There is document at the Mitchell Library, although I have not viewed the document, that indicates that there lengthy delays to the “Thames” departure from Cork Ireland. This may account for the date that Dr Linton starts his records 20 September 1825 and sailing date 14 November 1825. Dr Linton was treating patients between these two dates. Perhaps Mary died before the Thames departed Cork.

** Presumably Jacob’s wife Mary Gowrie. This would contradict the assertion “His wife Mary did not go to Australia.” And just to complicate matters, here is another story!

That is the William Whitfield who arrived on the Thames – same date and place of birth – but those other details vary from other records. In this Jacob is considerably younger! Bob Starling’s dates for him are “Born 1774 in Ballyhagen alternate date 2 April 1772” and some convict lists give his DOB as 1760! — NW

Bob’s research on the Thames and what happened to the people on her is now held by the Society of Australian Genealogists. There’s a great dramatic story in this voyage, I am sure, were someone to tell it! And they came via Cape Horn! Pernambuco is a state of Brazil.