Yes, of course I watched this, but via ABC in Wollongong.

Now other stray bits for you. Did you notice the passing of one of the military greats of the 20th century? That is so whatever side one might have been on at the time.

An outpouring of grief has swept Vietnamese social media and internet sites over legendary General Vo Nguyen Giap whose brilliant and ruthless guerilla tactics defeated both the French and American armies, hastening the collapse of colonialism in Asia.

One of the 20th century’s most important military figures known as the ‘‘Red Napolean,’’ Giap died at a military hospital in Hanoi late on Friday aged 102.

Even at the time of his death Giap was fighting a fresh battle to protect Vietnam’s environment.

‘‘Rest in peace the hero of the people. You will always be our greatest general,’’ was typical of the tributes that swamped the internet.

‘‘He’s a mythic, heroic figure for Vietnam,’’ said Carl Thayer, a Vietnam expert and emeritus professor at the University of New South Wales at the Australian Defence Force Academy in Canberra.

John McCain, the former US presidential candidate and navy pilot who was shot down and held as a prisoner of war in Vietnam, said the feisty commander was a brilliant strategist ‘‘who once told me that we were an honourable enemy’’…

Passing too another Asia-related person of a different kind, though there was a war connection I had not been aware of.

For two years during the war, Jacobs was seconded to the US Army, to work within G2 Intelligence, first in Sydney and then Brisbane. She documented the setting up of the USA Services of Supply and then wrote a history of the US Army in the Far East, beginning with the arrival of General Douglas MacArthur.

After the war, the university’s history department was small, and Jacobs, like others, learnt a broad range of subjects to teach in all areas. She was particularly proud of her early pioneering work in historical method, a fourth year honours course introduced in those early years. She later also pioneered historiography seminars for postgraduate students…

In London, Jacobs encountered some of the ideas, events and people that influenced her for the rest of her life. The Burmese struggle for independence and the charismatic figures it produced caught her interest and she attended talks on Partition and the transfer of power in India.

Mahatma Gandhi was killed shortly after Jacobs left Britain and in her later years she recalled seeing the Indian Congress memorial service for him on Chowpatty beach in Bombay.

Soon after returning from Britain, one of Jacobs’ earliest concerns was seeing that the study of Asia did not disappear from the history department or the university. There was a proposal to transfer Oriental Studies to Canberra and she successfully opposed this.

She went on to expand the study of Asia and clearly define what it was to become over the three decades until her retirement in 1980. From the mid 1950s, largely at Jacobs’ instigation, significant courses were introduced at the undergraduate pass and honours levels on Asian history…

Marjorie Jacobs graduates from the University of Sydney in 1936.

My History score crashed the following year, thanks to a bad habit of guessing what would be in exam papers… Worked in 58, not in 59. The teacher, Frank Allsopp, used me as an awful warning for several years into the 60s – by which time my History score so recovered at Sydney University that in 1962 I topped Asian History, then an exciting new field. I think I recently saw a death notice for one of the two lecturers in Asian History at that time, Marjorie Jacobs. India was her specialty. The other lecturer was Ian Nish, expert on Japan and China. It was a very good course. See also My Asian Century.

Speaking of historical resources, I am quite excited to see that Trove has almost finished digitising The Illawarra Mercury. You can already search it and find snippets. For example:

OUR SOLDIERS. [coming soon]
Illawarra Mercury (Wollongong, NSW : 1856 – 1950) Friday 30 March 1917 p 2 Article
… OUR SOLDIERS. Mrs. Whitfield, of Campbell-street, Wollongong, has received a letter from her son, Lieutenant Norman Whitfield, in which he states that he has been awarded the Military Cross, and also mentioned in despatches. _ Private Harold Downie is returning home – unffif for lurtbar a eKhNgr … 48 words

That Norman (right) was a cousin of my father. See my 2006 post Late Anzac Day thoughts.

While in Wollongong, it is worth tracking in the modern Illawarra Mercury the saga of the coal miner Gujarat NRE, for example Gujarat NRE miners left out of pocket | Illawarra Mercury.  It is increasingly bizarre, and not good for our area. The story goes right back to India as well, as Google News Search shows. It isn’t just a parochial story.

One thing is worth noting: this sorry saga has little to do with the Australian Carbon Tax.

The head of Gujarat NRE says the impact of the carbon tax has been far less serious than predicted.

The Illawarra mine operator was tipped to be one of the worst affected by the $23 per tonne price on carbon which started mid last year.

It was listed among the top 300 polluters along with BlueScope Steel.

“We got assistance under a coal sector jobs package and I think current liability would be more or less taken care of by the package we received so I don’t think we are hit as seriously as predicted,” Mr Jagatramka said.

Today’s Sun-Herald has another story about cosiness between Gina Rinehart and some figures now in the current government. I don’t think this is a good look at all.

It was among the most lavish weddings in Indian history.

Gina Rinehart flew three Coalition MPs from Perth to Hyderabad in a private jet, where they watched the granddaughter of her business partner marry in front of 10,000 guests.

But Barnaby Joyce, Julie Bishop and Teresa Gambaro collectively claimed more than $12,000 in ”overseas study” allowances to pay for their flights home.

Mrs Rinehart was about to clinch a $1 billion coal deal with the bride’s grandfather – G.V. Krishna Reddy, the founder of GVK, one of India’s largest energy and infrastructure companies.

Forbes India reported that the invitations to the wedding of Mallika Reddy in June 2011 were sent out with golden statuettes to Bollywood stars, politicians and socialites.

In the name of fostering stronger ties with India, Mrs Rinehart invited Australian politicians to be her guests at the wedding. The three Coalition MPs accepted, while Labor’s then resources minister Martin Ferguson rejected the billionaire’s offer, telling The Age he did ”not think it appropriate to attend”. What was not reported at the time was the extent to which Australian taxpayers helped pay for the politicians’ travel… 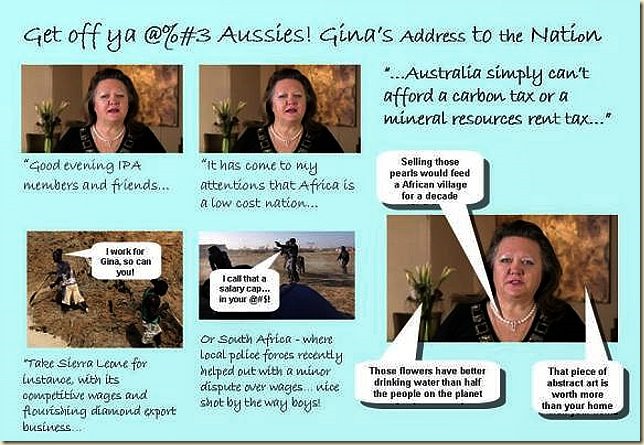 Addressing a libertarian think-tank in Perth last July, the British climate change sceptic Christopher Monckton urged Australians to create a home-grown version of Rupert Murdoch’s Fox News. The “super-rich”, he said, should invest in the media, install like-minded commentators and give the country “a proper dose of free-market thinking”.

Lord Monckton’s visit was part-funded by one of his biggest Australian fans, Gina Rinehart, the multi-billionaire iron ore magnate. A year on, Ms Rinehart – the country’s wealthiest individual – is on the verge of becoming its newest media mogul, a prospect that is sending a chill through newsrooms, boardrooms and the corridors of government.

The notoriously secretive 58-year-old has acquired a seat on the board of the Ten Network, where her favourite journalist, the ultra-right-wing Andrew Bolt, has his own show. And she has become the largest shareholder in Fairfax Media, Australia’s oldest and most venerable newspaper group, sparking fears that she wants to use her stake to promote her own commercial interests…

Listen also to this: