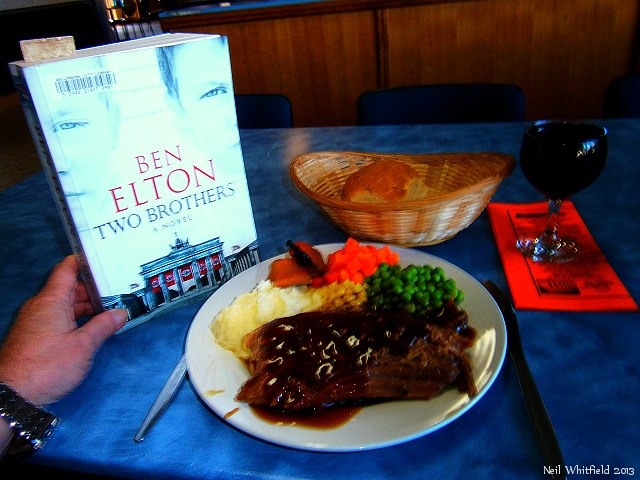 That’s over a $10 roast at Wollongong Hellenic Club a couple of weeks back. The food was also good.

Berlin 1920
Two babies are born.
Two brothers. United and indivisible, sharing everything. Twins in all but blood.
As Germany marches into its Nazi Armageddon, the ties of family, friendship and love are tested to the very limits of endurance. And the brothers are faced with an unimaginable choice….Which one of them will survive?

The amazing true story that underlies/inspired the novel is told here. Years ago when I was studying British History at Sydney University I little dreamt that the historian Geoffrey Elton (Ben Elton’s uncle) was anything other than 100% Pom!

…Elton had been born in Tubingen in 1921 and eight years later his family had moved to Prague, where his father, Victor Ehrenberg, held a chair in Classics. Here they were sheltered from the Nazis until the Munich agreement in 1938. The family escaped to England in February 1939, some two months before the German occupation of Czechoslovakia. Their escape had been made possible by the intervention of Esther Simpson, Secretary of the Society for the Protection of Science and Learning. She wrote to Elton’s father, who had been awarded a grant by the Society, to tell him that the Home Office would raise no objections to his bringing his family to Britain with him. Rydal School in North Wales offered free places to the two Elton boys. The school has since instituted the Ehrenberg-Elton scholarship for the free education of Czech boys and girls.

Lewis Elton recalled that one of his brother’s earliest literary works, written when he was not quite 13, was a historical play entitled Assassination Through the Ages, – apt you might think for someone who, later in life, was not afraid to assault the reputations of those historians with whom he disagreed. At Rydal School he learned English in just four months and around that time he wrote, ‘Within a few months it dawned upon me that I had arrived in the country in which I ought to have been born.’

After leaving Rydal, he took an external degree at London University, having narrowly failed to get an Oxford scholarship. Then in 1943 he enlisted in the British Army, serving in the Intelligence Corps and with the East Surrey Regiment in the 8th Army in Italy, and changed his name to Elton. After the war he returned to London and started historical research, leading to a PhD…

Some critics have slammed Two Brothers, but I am not of that camp. I think it is superb, and I confess I wept when I read the chapters around the events of Kristallnacht.

Two Brothers makes plain the process by which the unspeakable became acceptable in 1920s and 1930s Germany, and on into post-war East Germany. Without drawing a long bow, or pressing too close a similarity, I am therefore deeply disturbed by the turn official asylum seeker policy and the discourse surrounding it has taken in Australia lately. Last night’s Media Watch captures some of what I see happening to us.

It’s a powerful and emotive report, especially if you have young children.

But a few hours earlier Toohey had filed an an even more gut-wrenching despatch from the Javanese fishing village where bodies and survivors were being brought ashore.

THE dead baby has lain all morning on a table in the local clinic, wrapped in a white shroud.

But now it is time to move the child inland to a proper morgue. Vinothini, a very young mother, is hit with yet another crushing wave of grief … Wrenching screams breaks out in the clinic grounds as a Sri Lankan mother is reunited with her lifeless son, who appears to be aged about five.
— Daily Telegraph, 25th July, 2013

So why IS this such stand-out journalism, and why is it so rare?

Well, you had to BE in Java to get that story, and be there when the tragedy unfolded.

News Corp Australia spent the money and took the punt.

But the other reason we don’t see more is that the Australian government does its best to prevent the media from humanising asylum seekers.

No names, no faces, no personal stories … and no real access for the media.

I think the government has been doing its best to deny access to the people, which would give Australians a better understanding of the issue. The humanising does not have to change anything … it doesn’t have to change people’s views on asylum seekers and whether they’re good people or bad people, it’s just a story of our times that needs to be told.
— Paul Toohey, Statement to Media Watch, 26th July, 2013

Do you share my unease about things like that, and about the quite deliberate rebadging of asylum seekers Bob Carr indulged in just a couple of weeks ago?

Someone who does is Peter Job: A better way to prevent asylum tragedy.

Ten years ago an asylum seeker I advocated for was released from detention. He was the first refugee I worked for; I came into contact with him as part of a letter-writing campaign organised by Rural Australians for Refugees.

He was then a supposedly ‘failed’ asylum seeker who had spent a number of years in detention after rejection by both the department and the Refugee Review Tribunal. After an exchange of letters and phone calls, he sent me his documentation. As a school teacher with little experience in such matters, I thought there would be little I could do, but what I found astonished me.

My friend had escaped in fear of his life from a brutal military coup in an African country, one which had resulted in members of his ethnic group and political party being thrown into mass graves in a country which soon after descended into civil war. Yet he had been assessed using country information published before the coup took place, ignoring the murder and violence which a modicum of competent research would have quickly uncovered.

As any refugee advocate knows, proving an asylum seekers’ claims and reversing an incompetent decision are very different things, and it took an 18-month campaign through a number of international organisations before he was finally released. He is now well settled with a family and a career through which he pays taxes and contributes to the nation.

Involvement in one case led to others, and in the years that followed, very similar patterns repeated themselves: an Iranian asylum seeker who spent five years in detention before being found to be genuine, despite clear information which should have quickly verified his claims; a Syrian Palestinian who spent almost six years detained, including two very close shaves with deportation, before intervention by the UNHCR itself demonstrated he would face imprisonment and possible death if returned.

All are now productive members of the community, working and paying taxes. To those who have advocated for refugees, the claim by Bob Carr that our processing system leans too far toward refugees looks as strange as the assumptions by so many that refugees pose a threat to the community….

If you go on to read the thread following that article you may find yourself weeping and gnashing your teeth. I did. But there are also some gems there.

Asylum seekers aren’t illegal. They are legal under Australia law (Migration Act 1958) and international law (UN Refugee Convention)
They are mostly NOT economic refugees: An official Department of Immigration document shows the top 5 countries of origin for asylum requests who have come by boat (Irregular Maritime Arrivals), and the percentage found to be genuine refugees in the March quarter 2013. (Table 21).
Afghanistan 95.4%
Iraq 91.5%
Iran 86.5%
Pakistan 81.4%
Sri Lanka 75.0%
http://www.immi.gov.au/media/publications/statistics/asylum/_files/asylum-stats-march-quarter-2013.pdf

The world's most entertaining literary blog!